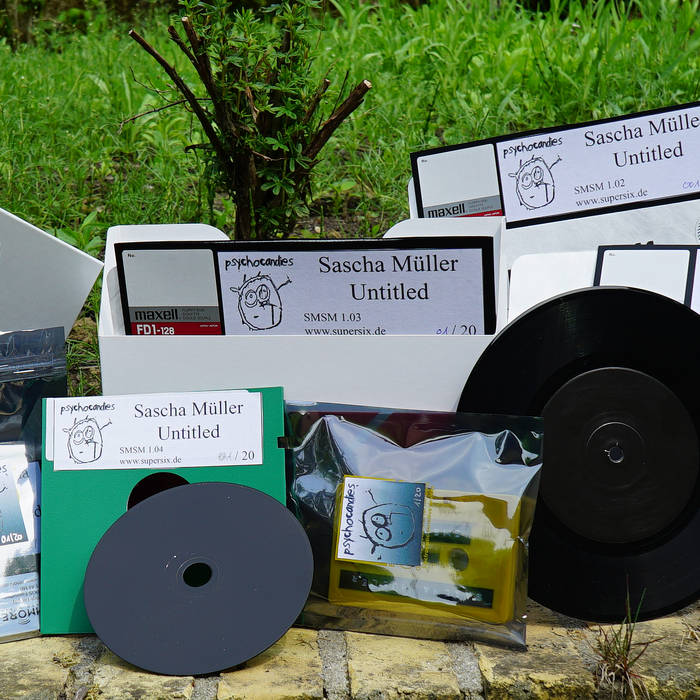 The man Sascha Müller is back and he's back with a box. Nicely packaged in an 8" IBM floppy disk cardboard box the latest limited to 20 hand-numbered copies edition release on the Psychocandies label includes the first and second 7" vinyl released on the label which we've previously reviewed on these pages accompanied by third, box-exclusive and hand-cut 7" sporting the catalogue number SMSM 1.03 as third part of the vinyl series, bringing forth a deeper, spaced out and jacking, yet somehow skippy slow motion Acid(House) effort as well as an hypnotic take on spiralling AcidTrance on the flipside. Furthermore the limited to 20 copies box-exclusive CD-r covered in black spray paint as SMSM 1.04 caters a sweet ten track menu of lively, untitled Acid variations as well whereas the additional SMSM 1.05 1.44 MB floppy disk contains three more .wav file tracks serving short acidic loops for sample purposes and the final untitled cassette tape dubbed SMSM 1.06 goes deep into live jam territories introducing both classy, slightly Acid-infused space Electro as well as distinct, slow-grooving and levitating ElectroPhonk for late night sessions to the audience of listeners. A massive package, this is.